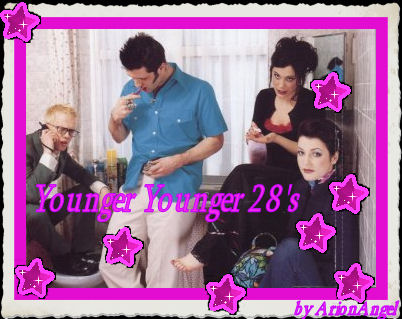 There’s very little evidence online that The Younger Younger 28s ever existed. No videos on YouTube, no misty eyed obits on blogs. Just a solitary MySpace page http://www.myspace.com/youngeryounger28s which feels like it could disappear and no one would care. Which in my book is a tragedy for they were not only a brilliant pop band but utterly unique for the time.

The easy comparison (two northern blokes, keyboards, two female singers) is The Human League and yes they did sound the Sheffield electro popsters on occasion. But rather than the glam of Don’t You Want Me, YY28s wrote about Teenage Mums, strippers with HIV and lives on seedy drug-ridden estates. What made them brilliant was that the lyrics were wrapped in the most uplifting hummable tunes that even your grandma could love.

Best of all is We nearly Made It (it is on the MySpace page) a kind of Nancy and Lee Jackson-style break up ballad, but set in Mansfield rather than Mississippi. The album, Soap, even finished with a stirring version of Inbetween Days, and this at a time when it was cooler to admit to a soft spot for S Club than own anything by The Cure.

Sadly Soap sold about three copies, though lead singer, Ashley Reaks had made a couple of pretty good albums since. He really should have been a huge star.