So says The Metro – http://www.metro.co.uk/sport/oddballs/874124-lille-reveal-farcical-chu-young-…

Let’s hope he is as fast on the football field. 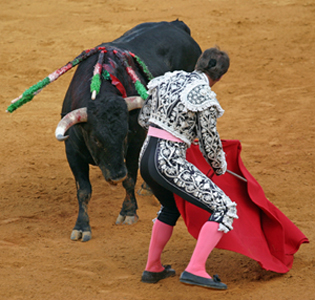 Where’s Morrissey when you need him? Apparently France and Spain are trying to get UNESCO to protect this cruel bloodsport by getting it listed as a form of “cultural heritage”.

Killing animals for sport is obviously wrong. And a lot of people in France and Spain disagree with it too. The good citizens of Barcelona (and the rest of Catalonia) banned it last year – http://www.dailymail.co.uk/news/article-1298303/Catalonia-Spanish-region-ban-… and there are significant anti-bullfighting movements in southern France. In fact in France bullfighting is a relatively new sport introduced by Spanish emigrees a century ago. http://www.bbc.co.uk/news/world-europe-11654609

Anyhow there is an opportunity to bring bullfighting into the limelight again and put pressure on Spain and France to stop it.

Pop here and sign the petition to stop this cultural heritage nonsense.

Here’s the blurb from the site

Every year, about 250,000 bulls are killed in bullfights — stabbed multiple times with barbed lances and banderillas (spiked wooden sticks) before suffering slow, agonizing deaths in front of an audience, including children.

Now, even though bullfighting attendance is at an all-time low and bans have been enacted by several countries and cities, France and Spain are trying to protect this cruel bloodsport by getting it listed as a form of “cultural heritage”.

Bullfights aren’t “fair fights” between a bull and a matador. They’re highly staged forms of animal cruelty, sanctioned and subsidized by governments. A UNESCO “cultural heritage” listing would give a veneer of respectability to the torture of animals for public entertainment and mean subsidies may be made available to financially safeguard the future of bullfighting.