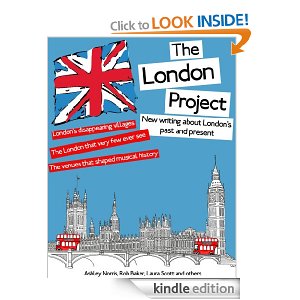 Over the last few months I have been working on an ebook called The London project. It features high profile London bloggers Laura Scott (The Locals), Rob Baker (Another Nickel), Dan Calladine (Pop Up London), Sean Hannam (Say it with garage flowers), Paul Sorene (Anorak, Who Ate All The Pies) and several others.

and a load more.

It was created for the iPad using iBooks Author – which enabled us to add galleries, maps and video – which in the context of The London Project are mainly used as footnotes. The Kindle version is a bit more straightforward. Ultimately though The London Project is about words.

and the Kindle here http://www.amazon.co.uk/The-London-Project-ebook/dp/B008DCORL0/ref=sr_1_4?ie=…