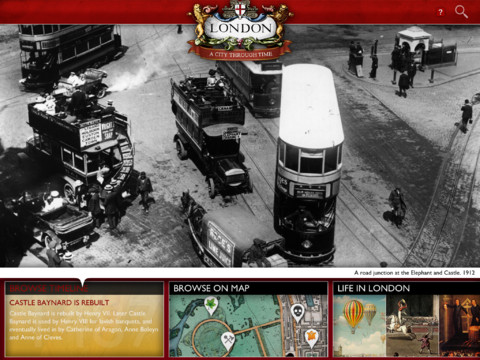 There’s a lot of London publishing going on at the moment (coughs, http://itunes.apple.com/gb/book/the-london-project/id536879753?mt=11) but in terms of digital publishing nothing quite as ambitious or an innovative as this.

London – A City Through Time is an iPad app that is an extraordinary in its scope, vision and technical implementation. There really is nothing like it. Its executed by a company called Heuristic Media who have worked with among others Macmillan Publishing and The Museum of London to deliver a history of the capital using images, video, maps and a load more. There is some text there too – more on that in a moment.

At first glance it looks mind blowing. There are a number of ways of working your way though it. You can access information via a Timeline or find things via interactive maps. Alternatively you can just browse through videos, maps or individual subjects.

There is some fantastic stuff in here. The images, everything from portraits of medieval queens through to harrowing images of WW2 London are really superb. There are also a few very striking skyline images that enable you to get a 360 view on either via using your finger or by using the iPad’s gyroscopic facilities.

I also love the maps, mainly from the Victorian era, which show how the city began to sprawl during that century. You also get a few celebrity quotes on London, some cute Pathe videos featuring a cast that includes Oswald Mosley and John Lennon and a trio of audio tours you can take.

Ironically, for what can still be loosely termed a book, is that while the app is brilliant on images and interactivity it isn’t great on words. I was promised several thousand articles – what I got was school essay type stuff and load of links to Wikipedia. I am guessing that most of the content is curated from another source, but it is dull, textbook like, and quite often not especially relevant. It really undermines what could be a promising section on tube trains, and adds little to the overall package.

To be fair, the vast majority of people who buy this won’t care anyhow. What this app does brilliantly is curate cool stuff about London. In five years time individuals will be able to do something similar in that they will curate content that has been stored online and package it up as content on an iPad.

The other sticking point might be the price. Personally I feel a tenner is fine for the app, but a friend who was also blown away by it, has reservations about the price.

However, don ‘t let minor quibbles about words put you off. If you want words go here http://itunes.apple.com/gb/book/the-london-project/id536879753?mt=11 (coughs).

This is a fantastic app that both tourists and Londoners will cherish. Go buy it!